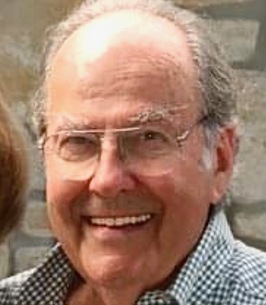 Brevard - David C. Warinner, age 88, passed away peacefully on July 13, 2022.
He is survived by his wife of 38 years, Christine Schmidt, and his son, Charles Warinner (wife Debbie Zimmer) and daughter, Barbara Warinner of Cincinnati, OH and his stepdaughter, Katrina Bullard (husband Patrick Bullard) of Pinehurst, NC.
Born in Alton, Illinois on April 11, 1934 to Dorothy Moodie and Charles Warinner, David was raised with his older brother, Robert, in Kirkwood, Missouri by his then-single, professional mother, Dorothy – long before single parenting was common. Despite enormous challenges, David attended Park College where he thrived as a music-loving, banjo-strumming troubadour and man about campus. David’s love of music would last his entire adult life.
After college, David moved to Cincinnati, Ohio to begin his career at the Procter & Gamble Company as a corporate recruiter (in some of the best business schools in the country). It was there that he met and married his first wife, Ann Lewis Turley Warinner (from Richmond, KY). He then proudly joined the US Marines, and achieved the rank of Captain, before retiring from the military and returning to Cincinnati and P&G to settle and raise two children, Chuck & Barb, there with Ann.
David continued to enjoy music (singing in the Hyde Park Community United Methodist church choir and with various barbershop quartets, along with music parties at home), crafting master woodworking furniture (a skill he learned in the Marines), becoming a Grand Cru Classe wine importer and home winemaker, captaining the family’s boat, grilling like a champion, and being the family’s documenting photographer, taste-testing “Cookie Monster,” chief listener and safe driver on all family vacations.
Meanwhile, David joined the cutting-edge Organizational Development Team at P&G, preaching and teaching the value of diversity, non-discrimination, true “human relations” and respect as businesses struggled to adapt to a rapidly changing workforce in all aspects – racial, sexual, ethnic and more –throughout the 60’s, 70’s and 80’s. He was a much beloved trainer at P&G during this time and touched many lives in positive ways.
Shortly after his children graduated from college and he divorced, David met Christine Schmidt, a VP at a Marketing Research firm in Montreal, Canada, at a business conference. Christine and her 6-year-old daughter, Katrina, moved to Cincinnati where they became David’s “second family” in June of 1984. Ten years later, David retired from P&G after a 37-year career there, then moved to the mountains of Western North Carolina, building a house in Bethel, outside of Waynesville. The family moved to Brevard, NC In 1998.
In Brevard, David & Christine enjoyed remodeling several homes and creating beautiful gardens. They created Hemlock Savers to treat and rescue several thousand Hemlock trees from the Hemlock Woolly Adelgid infestation. David loved meeting new clients and explaining the benefits of treating their hemlock trees to save them.
David sang in choirs in Cullowhee and Brevard. He loved ushering at the Brevard Music Center and serving wine at the concession booth. David enjoyed being a member of the Unitarian Universalist of Transylvania County church for twelve years, volunteering in different roles and leading a team effort to craft the Mission Statement.
David Warinner will be missed greatly by many. The family will host a memorial service for David on Saturday, August 13, 2022, starting at 2:00 PM, at the Unitarian Universalist of Transylvania County church in Brevard, NC located at 24 Varsity Place. In David’s memory, please consider a donation to the Brevard Music Center or the Unitarian Universalist of Transylvania County church.
Online condolences may be left at www.moodyconnollyfuneralhome.com