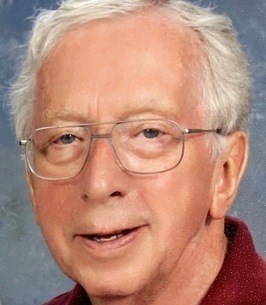 Brevard - Howard W. Shea “Howie” passed peacefully into the hands of his Lord, Jesus Christ the evening of June 26, 2022, following a long illness. He was 88 years old.

Howie was the oldest of 5 children born to William and Gertrude Shea in Rochester, NY. His siblings included Nancy (deceased ca. 1936), Jeanette (husband Tom deceased), Robert (wife Jean) and Kathy (husband Jim). He was predeceased by Jane, his wife of 58 years. He is survived by his second wife Barbara, son Tim (wife Maria, children Emily and Jacob) and son Mike (wife Amy).

He lived most of his childhood years in the family home in the Rochester suburb of Fairport. From about the age of 6-8, he lived at a children’s hospital and was treated for a leg condition with bedrest for 2 years. He recovered quickly and was active on the small home farm, raising chickens and drawing water by hand from the family well. He went on to attend Clarkson College where he received his mechanical engineering degree. It was there that he met his future wife Jane who was studying music at neighboring Potsdam College. Their marriage was truly a match made in heaven. Jane was the love of his life.

After graduation, Howie signed on with the Army Reserves and he took a job with the utility company Rochester Gas and Electric. He held many positions with the company, eventually assuming the position of plant manager of the electrical generating plant Russell Station. In 1957 he and Jane married. Within a few years, they welcomed Tim and Mike into the family, and they lived in the Rochester suburb of Webster. Despite being quite busy with his work position, Dad always prioritized time for his family. He was a loving father, always supporting his children in their endeavors and played an active role in parenting (“wait until your father gets home…” were the dreaded words from Mom that Mike and Tim did not want to hear). Dad also used his engineering skills at home: always tinkering with a home improvement project. He designed an outdoor hockey rink for Tim, Mike, and several neighborhood friends to play hockey after school. Howie led the family on many camping and national park trips: this legacy of travel and adventure lives on in the family.

In 1982, Howie and Jane relocated to Charlotte, NC where he took a job with Duke Power and continued to work until his retirement. He and Jane built a lake front home on Lake Hickory, where they lived for several years until moving to Brevard. Dad loved food. Some favorites were ice cream and cherry pie. Jane and Howie were frequent patrons of Rocky’s, Falls Landing and Blue Ridge Bakery. Dad took care of Jane for several years with a slowly declining illness until her passing in 2015.

Howie was lonely until he met Barbara (St. John). They married in March 2020, just as pandemic hit, in a small private ceremony. Their love and caring for one another was a blessing through the isolation of pandemic. Mutual loss made their second marriage very special.

Dad was a gentleman’s gentleman. Kind. Caring. Loving. Patient. Steadfast and dependable. The best spouse, father, grandfather, mentor, and friend one could ever ask for. In 2006, asked how he wanted to be remembered, he said “I tried to get along with everyone and to look for the best in everyone. I love my God, Jesus, my wife Jane, and my Family”.

The family wishes to thank Transylvania Regional Hospital Transitional Care, Dr. Shane Foster and staff, Dr. Jim Kelling and staff, the staff and administration at College Walk, and CarePartners Hospice, all of whom provided care to dad over the years.

There will be a Catholic funeral mass celebrating the life of Howie on Saturday July 2, 2022, at 10 am at Sacred Heart Catholic Church in Brevard, NC. In lieu of flowers, Howie asks that memorial contributions be sent to Alzheimer’s Association of Western Carolina in honor of his wife Jane E. Shea or to Transylvania Homecare and Hospice Tree of Remembrance.

Moody-Connolly Funeral Home and Crematory are caring for the family.