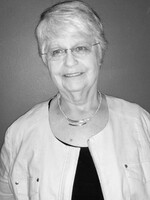 Pisgah Forest - Rita Gingrich Black, 77, passed on Tuesday, December 15, 2020 at her home.
Rita was born on November 17th, 1943 in Kewanee, Illinois. One of four sisters, she worked daily on the family farm with chores, harvests, and other duties. Her father was proud of the sisters' strong work ethic and when teased by other farmers about not having boys, he responded “four queens beat three jacks any day”. Her delight, however, was riding her horse and playing fast pitch softball.
After graduating from Mineral High School in 1961 in Mineral, IL, she attended Knox College and earned a BA in Music Education. Rita then continued to Northwestern University and earned a Masters degree in Vocal Performance. This is where she met her future husband, Larry Black. After they married in 1967, she spent several years teaching at West Point Elementary School and the 1-12 grade school in Syracuse, NY. Rita and Larry moved to Atlanta, GA and raised two boys, Corey and Thomas. Rita worked as an alto soloist in All Saints Episcopal Church and later at Peachtree Christian Church for 30 years. She also sang in the Atlanta Symphony Chorus and the Atlanta Symphony Chamber Chorus under the direction of Robert Shaw. Being an industrious person, she was also self-employed as a piano tuner/technician for 14 years while helping out with the family business, Leather Specialties Company.
In 2004, Rita and Larry moved to Brevard, NC where she worked a year as a soloist/section leader at a church in Highlands, but then officially retired in 2005. She became a member of Musicke Antiqua and Camerata Antiqua, early music consorts playing on replicas of instruments from the Medieval and Renaissance eras. She also joined the Brevard Belles, a consortium of bell ringers from local churches. Rita was a member of The Lutheran Church of the Good Shepherd, Daughters of the American Revolution (Waightstill Avery Chapter), 4H, and the Mayflower Society.
Rita is survived by her husband, Larry Black, two sons Corey and Thomas Black, and her five grandchildren.
Services will be announced at a later date.
Online condolences may be left at www.moodyconnollyfuneralhome.com

Moody-Connolly Funeral Home and Crematory are caring for the family.